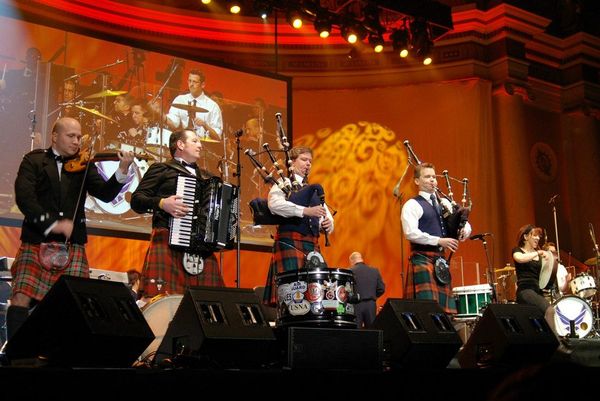 The American Rogues aren’t satisfied with classifications like “trad” and “Celtic rock.” So they coined their own genre: “CeltRockFolkWorldClassicalMusicForTheMasses.” Granted, it’s a bit of mouthful, but it allows the American Rogues to acknowledge the many influences and styles incorporated in the music they play. Perhaps the most essential part of that self-titled classification is “for the masses”: this band makes the dynamic fusions of old and new Irish music accessible for modern North American culture.

The band officially formed several years ago as a more traditional bagpipe band. Lead singer Nelson Stewart recalls that the American Rogues didn’t stay traditional for long. Gradually they added more members, more interests, and more genres. “We’ve evolved from being basically a bagpipe band playing jigs and reels to a much more sonically enriched and musically sophisticated group,” Stewart explains. The band’s historical trajectory can be traced from Celtic pipes, to incorporations of classical, Americana, and bluegrass music, and looking to the future, Stewart asserts they’re “not stopping there.” This group has played Highland games, folk festivals, large-scale concert halls, and some members have shared the stage with Grammy winners.  Now the American Rogues boasts of 14 band members from all parts of the world and several albums, the latest of which is their 2014 addition, “Live in Washington.”

The energy of the American Rogues’ music is infectious and particularly palpable in their latest live album. Stewart may want to emphasize the band’s various influences, but one cannot help admire their skill as pipe band on lively sets like “Pressed for Time” and “Itchy Fingers.” “Live at Washington” involves the listener in the American Rogues performitive experience: it elicits the atmosphere of a show like any good live album should. No doubt it will have you wanting to attend a show in person to experience the music’s vivacity in its immediacy.

What heightens the dramatics of this live album is the instrumental support of the United States Airforce Symphony, giving the sounds of the American Rogues’ Celtic-American music even greater power. The album was recorded at DAR Constitution Hall in D.C. This performance carried personal significance for the band too. “We have deep respect for our military veterans and seek to consistently honor the sacrifices they have made for us throughout the years,” Stewart explained. As part of the band’s career, they have raised funds for Vietnam veterans, for the Navy SEAL Museum, for the Air Force, and for many othe military organizations. The band’s philanthropy doesn’t stop there: they’ve also led educational efforts, such as a concert program that taught elementary and secondary school students across North America about Celtic history and culture. This band is as true to its American patriotism as it is to its Celtic roots.

Along with the release of their new album, the American Rogues are gearing up for a very busy Autumnal and Winter season. November will see them playing from Florida all the way to California, and 2015 will bring them farther North to Canada. They’ll make their way back to our neck of the woods in the Northeast later in 2015.

This band has to be commended for their energy. The American Rogues know how to command a massive stage and animate a crowd with the sounds of fiddles, pipes, and an impressive miscellany of instruments and styles. Finally, as “Live in Washington” demonstrates, they also know how to translate that spirit onto an album.

Find out more information at: theamericanrogues.com.