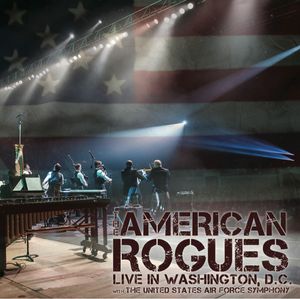 Two Celtic CDs have brought symphony orchestras into the fold within the past year and the results are marvelous. The first was the 2015 North Texas Irish Fes- tival headliners, Lunasa, working in the studio with the RTE Concert Orchestra.

The American Rogues have established themselves as the top Celtic band supporting military personnel and wounded warriors, both American and Canadian. Their schedule includes many gigs at military bases in Japan, Italy, Spain and Guam, and iconic venues, such as Washington D.C.’s World War II Memorial, the Lincoln Memorial, and the Marine Corps Memorial.

This album was recorded during a February 24, 2013 show at the DAR Constitution Hall. It was the main part of a show that included Irish stepdancers and a contingent from the Boyle School of Irish Dance from Alexandria, Va.

Enough cannot be said for the inclusion of the outstanding symphonic orchestra consisting of the Air Force’s best musicians, under the direction of Col. Larry Lang. Since it is a recording of a live performance, anyone listening (or watching) will get the unique appreciation that only comes up close and in person.

The album opens with an energetic version of “Pressed for Time,” before jumping into one of the group’s showstoppers, “The Gael,” with the Air Force Symphony. What was already a rich, exotic tune is taken to a much higher level with the addition of the orchestra.

Every note spotlights the great bagpiping of the American Rogues’ Doug MacRae and Lyric Todkill, fiddling of Corey Walden, Keith Jackson’s steady bass and the drum and percussion work by Catherine Hauke.

The tune, “Bonny Portmore,” is another signature moment for the group – done in the usual American Rogues style. On “Panda (The Other White Meat), the group is joined by Celtic Aire, a fine Celtic group within the U.S. Air Force’s musical family which adds a playful banjo to the track.

Every American Rogues show is a blend of fun and great Celtic sounds.  But Stewart and mates knew this was an extraordinary opportunity to display their energy, craftsmanship and joy, while expressing support for an important cause and for cherished men and women.

The group has dedicated part of the sales proceeds towards various military charities, notably Operation Ward 57, highlighted in a previous Ceili, which raises funds to help the many returning wounded warriors.

When you purchase this CD-DVD combination (available at most online outlets or at www.theamericanrogues. com), you’ll be promising yourself a great listening experience and helping those dedicated to protecting our freedoms.