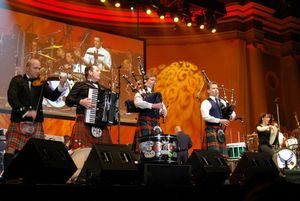 The American Rogues recently released their brand new album, The American Rogues Live in Washington D.C. The result of a collaboration with the US Air Force Symphony and as part of the symphony's Guest Artist Series, the resulting performance is an excellent mixture of both traditional and original music. The harmonious sounds of bagpipe, accordion, fiddle, drums, bodhran and bass guitar are enriched by the symphony's orchestral contributions, rounding out this rousing, inspired joint performance. Such an astute pairing of these two exceptional groups it is! Each compliments the other and together their performances have contributed to this exceptional album, The American Rogues, Live in Washington, D.C. The American Rogues fans have their favorite songs. Two on this album are definitely mine. Itchy Fingers/Clumsy Lover, an upbeat cheerful, make ya' want to march is one of them. Another, and an American Rogues original, Scotland the Brave (especially performed in concert) is number one on my list. Visualize the entire band performing this one and parading down from the stage into the crowd; then winding through the aisles surrounded by cheers and applause from their most appreciative audience. It is an absolutely unforgettable experience. If they perform in your area, don't miss the concert. Seeing this performance alone is more than worth it. To be honest, every song on this album is a great listen. The American Rogues Live in Washington, D.C. is another brilliant, entertaining American Rogues production and well worth adding to anyone's music collection. The American Rogues, Live in Washington, D.C. Song List 1. Pressed for Time 2. The Gael 3. Bonny Portmore 4. Panda (The Other White Meat) w/Celtic Aire 5. Amazing Grace 6. Scotland The Brave 7. Itchy Fingers/Clumsy Lover Their music can be previewed, purchased and downloaded on The American Rogues website. A portion of the sale of this album goes to support military veterans' charities, including Operation Ward 57 and The Navy SEAL Museum. The American Rogues regularly volunteer to perform for WWII Vets at Honor Flights.   The American Rogues appearing with the Air Force Symphony: Nelson Stewart - Accordion, Keyboard, Tenor Drum, Bodhran Doug Macrae - Highland Bagpipes Lyric Todkill - Highland Bagpipes Corey Walden - Electric/Acoustic Violin Keith Jackson - Bass Guitar, Drums Catherine Hauke - Drums, Percussion and guest, Adam Tianello - Bagpipes   The American Rogues website: www.theamericanrogues.com 2015 Tour Schedule: http://theamericanrogues.com/tour